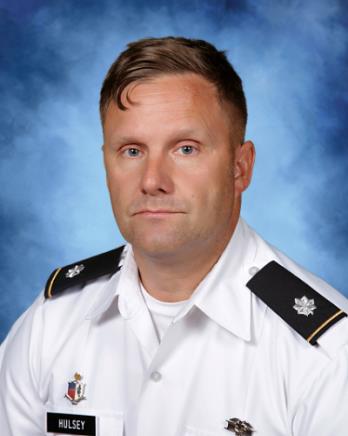 LTC Hulsey’s civilian and military education include: a Master of Science in Administration from Central Michigan University (05) and a Bachelor of Science degree from North Georgia College (94).   He is a graduate of the AMEDD Officer Basic and Advance Courses.  In addition to the Health Services Plans, Operations, Intelligence, Security and Training Functional Area, he also possesses the Human Resource and Logistics Officer Functional Areas.  He holds the Parachutist, Air Assault, and the Expert Field Medic Badges.  He is also a graduate of the Combined Arms Services Staff School (CAS3), the Command and General Staff College (ILE), and the ILE-Advanced Operations Course.

LTC Hulsey’s first assignment was as Treatment Platoon Leader for the 426th Forward Support Battalion, 101ST Airborne Division (Air Assault).  During that initial assignment he deployed to Haiti in support of Operation Uphold Democracy, where he served as a Detachment OIC for 6 months in Cap-Haitian, Haiti.  Upon return from deployment he was reassigned as the Medical Platoon Leader for the 1/327th Infantry Battalion, 101ST Airborne Division (Air Assault).  From there, he was assigned back to the 426th Forward Support Battalion as the Combat Health Support Officer, within the Battalion’s Support Operations.  After PCS’ing from those initial 4 years at FT Campbell, to FT Stewart, he was assigned as Company Commander, of Winn Army Community Hospital.  After PCS’ing from FT Stewart to FT Lee VA, he was assigned as Chief of Clinical Operations for Kenner Army Health Clinic, and held that title for the next 2 years.  LTC Hulsey ETS’d from Active Duty in March of 2002, and accepted an AGR position with the Georgia Army Nation Guard, and would serve as the states’ inaugural Deputy State Surgeon for next 5 years, charged with the comprehensive medical readiness of the Georgia Army National Guard.  From that post, he was reassigned as the Administrative Officer/Executive Officer of the 110th Corps Support Battalion, and held that position for the next 12 months.  He was reassigned in the fall of 2007 as the 648th Maneuver Enhancement Brigades’ inaugural BDE S1.  In September, 2008, LTC was assigned as the BDE S3, and held that role until July 2010.  Most recently, LTC Hulsey was assigned as the 648th MEB’s BDE S9 (civil-military & information operations) Officer.

LTC Hulsey is married to the former Carrie Hyatt of Dalton, Georgia.  Carrie is currently the real housewife of LTC Hulsey, and they have 2 children Hampton (2000) and Mary Ellis (2003). The family resides in Sharpsburg, Georgia.